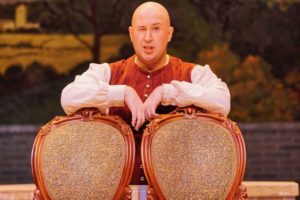 The obscure La Finta Giardiniera (The Fake Gardener) is making its modern-day debut twice in Portland in four months. The opera is Portland State University’s spring presentation (the final show is at 3 pm Sunday, April 28) and Portland Opera stages it in July.

Did Portland’s opera directors have the same dream at the same time?

Or is it the irresistible W.A. Mozart? The composer was 18 — younger than many of these student performers— when he wrote the opera, which premiered in 1775 in Munich. Even if the opera lacks a moral typical of his later pieces like Cosi, Don Giovanni and Figaro, its music hints at the Mozart to come. Guiseppe Petrosellini gets credit for the libretto though there is some controversy around who actually wrote it. Much of it is so repetitive that in the PSU production, subtitles disappear for stretches of time because the characters repeat the same thing over and over.

With its helter-skelter plot, mixed identities, and operatic exaggerations – these characters wear their hearts deeply inscribed on their long sleeves—La Finta, a fun “buffa” piece—is rarely performed, but it provides a good vehicle for young voices and energetic actors. Four couples, plus a mayor, go in and out of love and at times, go stark raving mad, or slightly nuts. The plentiful roles are distributed evenly, so the opera is well suited to such a student production as PSU’s, and in the case of Portland Opera, to up-and-coming resident artists.

Because the opera offers so many singers a fairly equal chance to shine, PSU’s Finta stops short of being a star vehicle. And the opera is packed with arias for everyone, but especially for the pretend gardener, sung convincingly by soprano Savannah Panah. The finales, and few ensembles, are worth waiting for, as they are in all Mozart operas. There just aren’t enough in this one.

The opera, originally about four hours, was shortened to 2 hours and 30 minutes. As spirited as the piece is, PSU directors could have cut more.

But back to Mozart, the beloved composer few can resist. To sing Mozart, a singer is “so exposed,” said PSU opera director Christine Meadows. “If you’re out of tune, it’s so obvious. It’s easy to do it poorly. It’s got to be clean to be beautiful.”

Most of the cast was composed of college seniors, and their maturity was evident. The group I heard on April 26 (the opera is double-cast) featured sopranos Panah in the title role as Sandrina/ Violante/ fake gardener, Maeve Stier as the snake-tongued servant Serpetta, and Helen Soultanian as the sourpuss Arminda who wields hilarious control over her suitors, smacking them with roses and her fan to put them in their places. All these senior-class women sang and acted well. Even in his early work, Mozart’s operas develop characters; these performers carried out that mission.

Filling out the seniors were baritone Erik Standifird as the clueless Mayor Don Achise whose 1-foot-high wig matched his bombastic personality, and bass Jonathan Roberts, as Nardo, a hapless servant rejected as often as he drew laughs. Roberts could be headed for musical theater stardom.

Freshman Avesta Mirashrafi, who looked like little Amadeus himself, sang Contino Belfiore’s tenor role. The freshman certainly has a future in opera if he chooses. He has a way to go in developing his voice. You could see him revving up with deep breaths before hitting the high notes, and he struggled in the final act (acts two and three are combined after intermission). But what engaging stage presence, what a warm tone.

Another treat was listening to a counter-tenor, a rarity on stage, especially in student productions. Nicholas Wavers performed Ramiro, a substantial part. He is mentored by mezzo-soprano Hannah Penn, the lead in PO’s transsexual opera As One staged earlier this year. Ramiro will be performed by senior mezzo Kaitlyn Lawrence on Sunday in her first pants role.

So much goes into an opera production. The vocalists received most of the applause for their generally tuneful Italian singing (accompanied by super titles). But the behind-the-scenes and in-the-pit artistic team added as much as the singers: the orchestra under PSU Orchestra Director Ken Selden, Chuck Dillard’s masterful harpsichord playing, director David Ward, who brought out the buffo in this rather silly comedy, set maestro Carey Wong, Hadley Yoder’s period costumes, and program director Meadows.

Wong’s set, enhanced by Peter West’s lighting, was as exquisite as it was clever. With trompe l’oeil doubletakes emanating from numerous doors that brought the indoors out and the outdoors in, the hand-painted set’s fluffy clouds and romantic forests conjured up saccharine 18th-century British landscape paintings a la Thomas Gainsborough, Joshua Reynolds and George Lambert. I admire PSU’s creativity to build a budget-bound set that can morph into a second-act spooky forest with “terrible beasts” where characters go nuts. Together.

Of course this is student production. In previous years there have been thin PSU operas such as Pauline Viradot’s Cendrillon or operas centered on a star singer such as Saori Erickson in the 2017’s Suor Angelica or tenor Christian Sanders in 2018’s Albert Herring. This spring’s La Finta — maybe a diamond in the rough — deserves praise for a solid, entertaining production, though it could have been shorter! Maybe it was just too many overly emotional characters going through too many petty crises, but that’s my 21st century sensibility speaking.

In an offbeat coincidence, Portland Opera will stage six performances of La Finta Giardiniera from July 12 through July 27. And odd it is because the opera is unfamiliar, and there was no spying, collusion or hacking.

The excitement of seeing another Finta– this one slimmed down to 3 hours and 15 minutes (if PSU’s was too long, what about this one?) — may rest in the hands of stage-director Chas Rader-Shieber, who led last year’s visually stunning and sometimes surreal Orfeo ed Euridice and 2013’s goofy Baroque-period Rinaldo.

“Chas has a unique way of presenting works in a traditional yet innovative way,” said PO’s general director Chris Mattaliano, who was coy in a recent interview about how “period” the piece will be in style.

Expect surprises, especially since this is PO’s nod toward lesser known pieces. The much performed La Traviata and The Barber of Seville are among its traditional shows this season.

If few opera-goers know Finta, most know Mozart, and the 18th- century composer, Mattaliano says, “has such a deep insight into humanity and understanding of the human heart. Although he wrote this piece at such a young age, you can hear his more well known works right around the corner.”